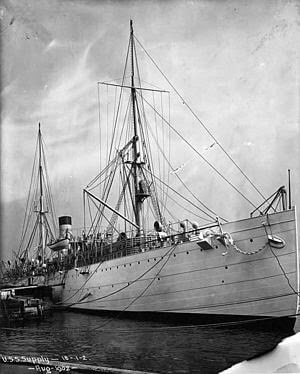 UFO News: An interesting Unidentified Flying Object reported by the U.S Navy during the turn of the last century found by the late Gordon Lore. Numerous similar reports were made in the 1950s. In particular On February 28, 1904, the US navy steam and sail schooner USS Supply was approximately 400 miles southwest of San Francisco. When three members of the crew sighted a object what they described as “Meteors”, for lack of a better term in 1904.

This would form the basis for one of the most remarkable early UFO sightings in history. Collecting the accounts was Lt. Frank Schofield, who would later become an admiral and Commander-in-Chief of the US Pacific Fleet. Schofield didn’t quite know what to make of the accounts, which described the red meteor-like craft flying in what”s known as the echelon formation.

At 6:10 a.m. local time, Lieutenant Scofield, the bosun, and one other crewman sighted an echelon formation. They were three objects which appeared near the horizon below clouds, moving directly toward the ship. As they approached, the objects began rising above the cloud layer. They were observed climbing into space, still in echelon formation.

The lead object was egg-shaped and about the size of six suns. The other two were smaller and appeared to be perfectly round. They remained visible to the men on board for more than 3 minutes. Of course, we know today that meteors do not travel in a perfect formation, change course, altitude, or speed and they certainly do not make circular maneuvers. These crafts went below and above a stable cloud cover which is impossible to do unless they were intelligently controlled.
Statement of Lieutenant Scofield.

The second was about twice the size of the sun, and the third was about the size of the sun. Their near approach to the surface appeared to be most remarkable. That they did come below the clouds and soar instead of continuing their southeasterly course is also curious. The lights were in sight for over two minutes and were carefully observed by three people whose accounts agree as to the details.”
LT. FRANK H. SCOFIELD Aboard the U.S.S. Supply/ credit: Special Thanks to Jim Morris